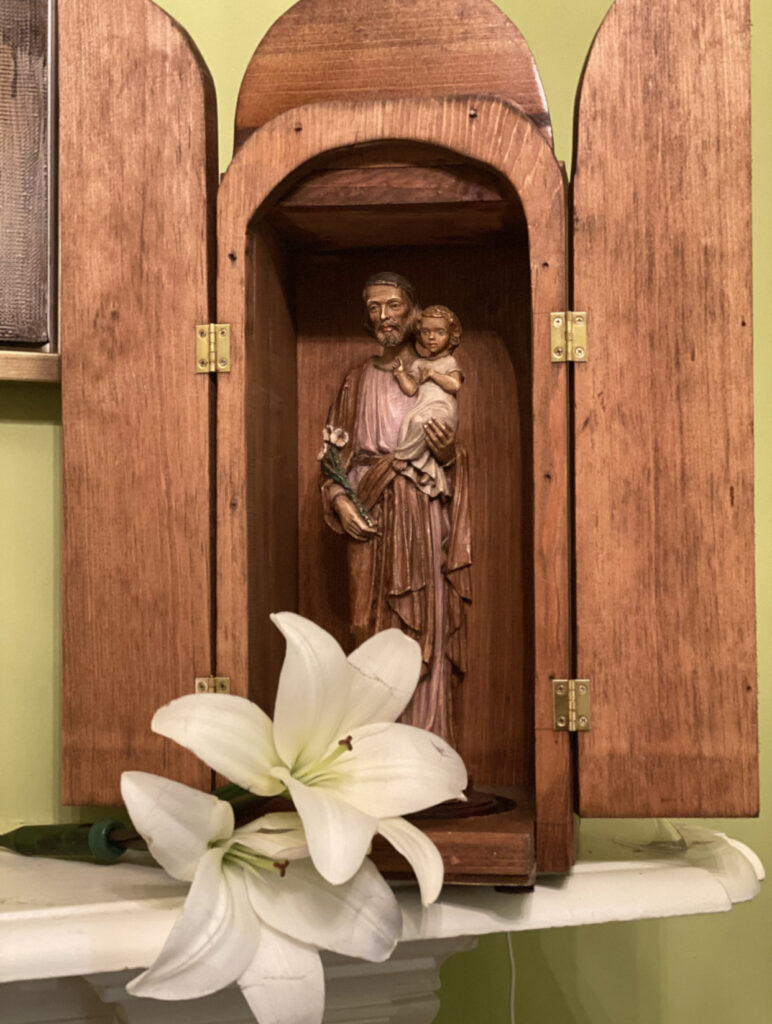 In the Year of St. Joseph, a special devotion to Jesus’ earthly father has taken root in Avoyelles Parish. Called the “Traveling St. Joseph, Our Guardian,” it is a statue housed in a special case that makes its way from home after home, staying nine days in a living novena.

Begun in Grass Lake, Michigan by Father Leo Joseph, director of the Shrine of St. Joseph, Patron of the Suffering and Dying, the traveling St. Joseph statue was introduced to the home church.
“As protector of the Holy Family, who better to invite into our homes than St. Joseph?” according to Father Joseph.

Accompanying the traveling statue are suggested prayers, although each family is free to pray however they choose. After nine days the statue moves on to a new family.
Barbara Lemoine of Mansura read about the traveling statue in the magazine published at the shrine and thought, “if they can do it in Michigan, so can we.”

That devotion coupled with determination began the Traveling St. Joseph in Avoyelles. She was so determined to get the movement started, Barbara went to the local nursing home where she had donated a statue of St. Joseph for the chapel, and took him back.

“I took my statue because he was the correct size for the job,” she commented. When she says “our” job, Barbara is including St. Joseph. She has such a great devotion and close relationship with him, she calls him “Poppa Joe.”

The statue has a very special case for transporting. Barbara was able to get Lynn Roy of Hickory Hill to make a case just like the original one used at the shrine in Michigan. According to Barbara, the handmade wooden case looks just like the one in the magazine article. “He (Lynn Roy) did a wonderful job,” she added.

In January of this year, Barbara relinquished facilitating Traveling St. Joseph to Anitra Dunbar of Marksville.

“She is in her 90’s, lives in an assisted living facility and doesn’t drive anymore,” Anitra said. “She prayed about it and felt led to ask me if I’d be willing to take it over.”

Surprised because she didn’t know Barbara that well, Anitra said, “I was honored and thankful she asked me.”

Sometime before being introduced to Traveling St. Joseph, Anitra prayed the consecration to St. Joseph with a group of friends. In the 33 days it takes to complete the consecration, Anitra said she had learned so much about the earthly father of Jesus she was ready to take on facilitating the traveling statue.

“People are very willing to take it into their homes. Right now it is in Fifth Ward with Wilbert Carmouche who has a waiting list of people. He told me that St. Joseph is getting fat on prayers.”

For information to start a group, to go: piusunionofstjoseph.org. For more information in Avoyelles Parish, contact Anitra Dunbar at (318) 359-2135.