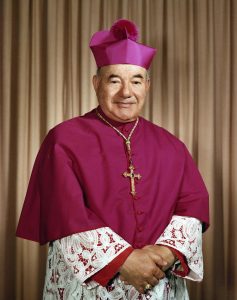 As word of Bishop Desmond’s death filtered out through the province, rumors regarding his successor centered on one person – Msgr. Charles Pascal Greco of New Orleans. Msgr. Greco was the son of Italian immigrants, the 3rd of 13 children. He was born in Rodney, Mississippi on October 29, 1894. His family moved to Waterproof, Louisiana and then relocated to New Orleans where their son enjoyed a Catholic education under the direction of the Missionary Sisters of the Sacred Heart. It was in their chapel, where he served at the altar, that he met Mother Cabrini who predicted that “This boy will go far in the priesthood.”

Charles Greco entered St. Joseph’s Seminary College in Covington in 1907. After completing his studies, he was sent to the University of Louvain in Belgium to complete his theological training. When war broke out in 1914, he found refuge at the University of Fribourg in Switzerland where he was able to complete his studies. He was ordained a priest in New Orleans on July 25, 1918. Fr. Greco served for 5 years as an assistant at St. Francis de Sales Church in Houma where he worked closely with the youth coaching baseball. He was recalled to New Orleans in 1925 by Archbishop Shaw to serve as vice-chancellor and later chancellor of the archdiocese. In 1926, he was appointed pastor of St. Maurice Church in New Orleans – a post he held for 19 years together with his chancery duties. In addition to his parish work, Fr. Greco served as the Defender of the Bond for the Matrimonial Court and as a Diocesan Consultor. In his spare time he wrote regular feature articles for the diocesan newspaper, Catholic Action of the South, later serving as editor in chief. For his service to the Church, he was given the rank and title of Right Reverend Monsignor by Pope Pius XI on Christmas Day, 1939. In 1945, Msgr. Greco was appointed pastor of Our Lady of Lourdes Church in New Orleans and vicar-general of the archdiocese by Archbishop Rummel.

Msgr. Greco received notification of his election as the sixth bishop of Alexandria on January 11, 1946. He was publicly appointed by Pope Pius XII on January 15. He was 51 years old. He was consecrated in St. Louis Cathedral by Archbishop Rummel on February 26 and installed in his cathedral in Alexandria on March 19, 1946. The new bishop took for his episcopal motto the charge of the Knights of Columbus: ‘Vivat Jesus’ – ‘Long live Jesus’.

Building on the foundations laid by Bishops Van de Ven and Desmond, Bishop Greco launched a diocesan expansion program that resulted in the erection of over 415 new buildings in 22 years including 124 churches and chapels, 48 schools, 64 rectories, 45 convents, 29 parish halls, 7 hospitals and nursing homes and 98 other buildings. A total of 33 new parishes were opened in the 27 years of his administration. New parishes in Alexandria were built and dedicated in honor of Our Lady of Prompt Succor, patroness of all Louisiana, and St. Frances Cabrini, the first American citizen to be declared a saint. A new Catholic hospital, the dream of Bishop Desmond, was dedicated on March 19, 1946, and placed under the administration of the Sisters of Charity of the Incarnate Word. New religious congregations were invited to work in the area: the Oblates of Mary Immaculate took charge of Mansfield, the Fathers of the Precious Blood served Colfax and the surrounding region, the Servite Fathers established a new parish for black Catholics in Pineville, the Crosier Fathers opened Dom Bosco’s Boys’ Home in Cottonport, the Daughters of St. Paul opened a Catholic bookstore. The bishop recruited seminarians and priests from Ireland and the war-torn countries of Holland, Italy and Belgium. He also established a diocesan community of religious brothers under the direction of Brother Aloysius. These Brothers of the Holy Eucharist were formed to ‘do all good things’. The bishop also supported the establishment of a diocesan congregation of women, the Dominican Catechists, dedicated to catechesis and evangelization.

One of the bishop’s achievements was the establishment of a diocesan seminary on the Pineville side of the Red River. Maryhill Seminary also served as a spiritual nucleus for diocesan retreats and youth activities. Used army buildings and barracks were purchased by the bishop and relocated to the site to create a large complex. The bishop invited the Fathers of the Immaculate Heart of Mary to serve as faculty and retreat masters. The seminary opened on September 12, 1949.

In addition to his work as chief shepherd of the diocese, Bishop Greco also labored as State and Supreme Chaplain of the Knights of Columbus, becoming the spiritual leader of over 1,200,000 Knights throughout the Western Hemisphere. He served as chairman of the U.S. Bishops’ Committee on the Confraternity of Christian Doctrine and served as a consultor to the Second Vatican Council helping to prepare the Council’s Constitution on the Life and Ministry of the Clergy. As an active member of the council, he did not miss a single session from 1962 to 1965. A man of great personal warmth and affection, Bishop Greco was highly regarded and esteemed by priests and laity alike. No previous bishop of Alexandria brought so much vast and wide experience to the office. Bishop Greco was honored by his brother bishops with the honor of delivering the dedication sermon at the consecration of the National Shrine of the Immaculate Conception in Washington D.C. on December 20, 1959.

The work closest to his heart was the establishment of training centers for handicapped children. Bishop Greco secured the services of the Sisters of Our Lady of Sorrows, an Italian congregation, to help in this difficult work. He established Louisiana’s first school for the mentally retarded, St. Mary’s in Clarks, in 1955. Another institution, Holy Angels, was opened in Shreveport in 1964. For his service to these, the most needy and therefore the most precious of God’s children, the Bishop was awarded the President’s Cup.

In 1953, the Diocese of Alexandria marked the 100th anniversary of the establishment of the Diocese of Natchitoches. Samuel Cardinal Stritch, Archbishop of Chicago, assisted at the Pontifical High Mass in St. Francis Xavier Cathedral marking that occasion. Seventy-six diocesan priests and 75 priests of various religious orders and congregations were at work in the diocese’s 74 parishes at that time together with hundreds of religious sisters and brothers. Over 10,000 children were enrolled in Catholic schools throughout the diocese. In 1968, the bishop celebrated his golden sacredotal jubilee with a mass and reception. Cardinal Cushing of Boston came to participate as the guest of honor. During the late 1950’s and early 1960’s, as the nation struggled to ensure equal rights for all, Bishop Greco oversaw the integration of the Catholic school system and ordained Father August Thompson, the first African-American priest for the diocese.

In 1973, Bishop Greco submitted his resignation after 27 years as bishop. He died in Alexandria in 1987. His body is interred in a special tomb erected in his honor by his brother Knights of Columbus in front of the main chapel at Maryhill.