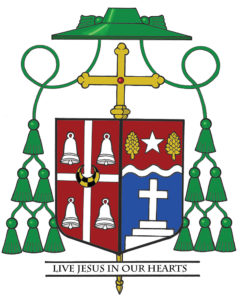 Each bishop has his own coat of arms that bears his episcopal motto and symbols that have some personal significance. The coat of arms is used on documents and letterhead and other items pertaining to that bishop.

BLAZON:
Arms impaled, in the dexter: Gules, a cross throughout between four bells all Argent, overall at the center point, a crescent checky Sable and Or. (Diocese of Alexandria); in the sinister: Azure a Latin cross issuant from three steps in base below a barrulet wavy all Argent; on a chief wavy Gules between two pine cones Or a mullet of five points Argent. (Bishop Marshall). The achievement is ensigned with an episcopal cross Or behind the shield and a bishop’s galero Vert cords and twelve tassels disposed in three rows of one, two and three all Vert. On a scroll below the shield the motto: “Live Jesus In Our Hearts.”

EXPLANATION:
The personal coat of arms assumed by Bishop Marshall combines symbols that are meaningful to him reflecting his life and priestly ministry.

The coat of arms of the Diocese of Alexandria was adopted in 1933 by Bishop Daniel Desmond and designed by heraldist Pierre de Chaignon la Rose. The red background represents the Red River which runs through the city. The silver (white) cross stands for the Christian faith and is surrounded by four bells borrowed from the ancient See of Alexandria, Egypt for which the city that is the seat of the diocese is named. Over all of this is a crescent divided into gold (yellow) and black checks. This is borrowed from the Spanish arms for the family “Xavier” and serves as an allusion to St. Francis Xavier, the titular patron of the cathedral church.

Bishop Marshall’s arms depict a blue background with a silver (white) Cross of Calvary. This type of cross is depicted as a Latin cross (the lower arm being longer than the other three) atop three gradings or steps. Both the background color and the cross are derived from the coat of arms associated with the name “Martin” in Ireland. This was the bishop’s mother’s maiden name and is used to honor his family heritage. The lower portion of the field is divided from the upper third called a “chief” by a narrow silver (white) wavy line. This wavy line represents the Mississippi River near to which the bishop has lived for most of his life. In addition, a symbol of the Mississippi River is included in the coat of arms of the Diocese of Memphis in which the bishop served as a priest prior to becoming a bishop.

On the red background of the chief are a single silver (white) five-pointed star between two gold (yellow) pine cones. The star comes from the emblem of the DeLaSalle Christian Brothers who educated the bishop both in his high school and college years as well as educating his father and uncles. That Religious Community of men had a profound and lasting impact on not only the bishop’s education but also on his spiritual life and journey and on the lives of his family. The red background and pine cones are borrowed from the coat of arms of the bishop’s patron saint, St. Robert Bellarmine.

The motto below the shield is, “Live Jesus In Our Hearts” from a prayer attributed to St. John Baptist de La Salle (1651-1719), founder of the Institute of the Brothers of the Christian Schools and patron saint of teachers of youth. The prayer is used multiple times each day in LaSallian schools throughout the world, most frequently in dialog. The leader says, “Live Jesus in our hearts,” and the students respond, “Forever!”

The shield is also ensigned with those external ornaments that indicate the bearer is a bishop. The gold (yellow) cross is placed vertically behind and extending above and below the shield. This is often mistakenly thought to be a processional cross like those used in liturgical processions. However, in former times archbishops, and later all bishops, had a cross mounted on a staff carried immediately in front of them while in procession or on solemn occasions. This cross was a symbol of their rank as bishop. While such an episcopal cross is no longer used practically it has been retained heraldically. In fact, there are other clerics who make use of the ecclesiastical hat with its many tassels but the one true heraldic emblem of a bishop, and the only essential one, is the episcopal cross placed behind the shield.

Above the shield is the ecclesiastical hat, called a galero which, in heraldry, replaces the martial helmet, mantling and crest. “The hat with six pendant tassels (green, purple or black) on each side is universally considered in heraldry as the sign of prelacy. It, therefore, pertains to all who are actually prelates.” (Heim, Bruno B., Heraldry in the Catholic Church 1978, page 114) The galero is green with green cords pendant from it and twelve green tassels arranged in a pyramid shape on either side of the shield. At one time in history bishops and archbishops wore green before adopting the more Roman purple we see today. In heraldry the green hat and tassels was retained for prelates with the rank of bishop according to the Instruction of the Secretariat of State, “Ut Sive” of March, 1969.

The armorial bearings of Bishop Marshall were designed, blazoned and rendered by the Rev. Guy Selvester a priest of the Diocese of Metuchen, New Jersey.