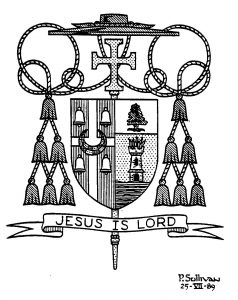 Bishop Jacobs was born in Greenwood, Mississippi from parents of Lebanese descent. He was raised in Lake Charles, Louisiana and studied at Immaculata Seminary in Lafayette from 1951 to 1957. He finished his philosophical training as a Basselin scholar at the Catholic University in Washington and obtained his degree in theology in 1964. He was ordained a priest by Bishop Warren Boudreaux for the Diocese of Lafayette on June 6, 1964. As a young priest, Fr. Jacobs was deeply devoted to working with young people. He was assigned as a campus minister and worked as vocations director for the Diocese of Lake Charles. He also served as the chairman for the National Service Committee for the Charismatic Renewal. He was ordained and installed as the tenth bishop of Alexandria on August 24, 1989 at the Rapides Parish Coliseum.

Bishop Jacobs began his administration with a tour of the diocese holding ‘town hall’ style meetings in every parish to gauge the needs of the priests and people. He targeted five areas of growth: youth ministry, priestly formation, vocations, adult catechesis and lay involvement, and concentrated his efforts to direct the resources of the diocese to meet these needs. The bishop combined his love of youth ministry with his charismatic spirituality in developing the Steubenville South Youth Conference. Various youth retreat groups were formed to continue the work of the conference throughout the year. A new youth center was built at Maryhill to accommodate these retreats. Native vocations to the priesthood grew as more and more foreign missionaries were invited to work in the diocese. Priests from India, Puerto Rico and Africa added their cultural richness to the diverse ethnic groups already present and a renewed Hispanic ministry was developed to meet the needs of migrant workers.

As the new millennium dawned, a new chancery office, St. Joseph’s Catholic Center, was built to replace the previous offices lost through fire. The cathedral was renovated in 1991 and in 1995-1996, in preparation for its 100th  anniversary. The Church of the Immaculate Conception was restored to its 1892 appearance at a cost of $1.2 million. A new center for campus ministry was built at LSUA outside of Alexandria. In 2003, the diocese celebrated the 150th anniversary of the establishment of the Diocese of Natchitoches with a year-long calendar of events. To commemorate that milestone, Bishop Jacobs designated the five oldest parishes of the diocese as ‘Proto-Parishes’.

On August 1, 2003 Bishop Jacobs was named the third bishop of Houma-Thibodaux and was installed as their bishop on October 10 of that year.