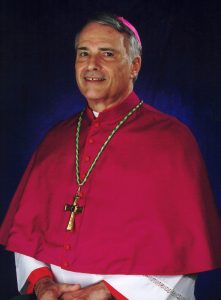 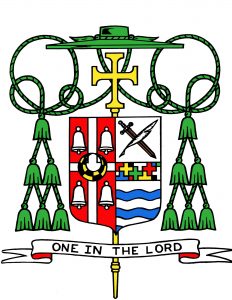 Born in Akron, Ohio on April 22, 1942, the only son of Paul Herzog and Kathyrn Donahue, Ronald Paul Herzog spent his early years in Natchez, Mississippi.

He was ordained to the priesthood for the Diocese of Natchez-Jackson on June 1, 1968 where he held pastoral and staff posts until the creation of the Diocese of Biloxi in 1977.  Bishop Herzog served the Diocese of Biloxi both as a pastor and as Director of the Diocesan Worship Office and as Defender of the Bond and was named a Monsignor with the rank of Domestic Prelate by Pope John Paul II in 1987.  He served the state of Mississippi as a chaplain in the state National Guard for 30 years, saw active duty in the Persian Gulf War and retired with the rank of Brigadier General.  For his years of faithful service he was decorated with the Mississippi Cross.

Bishop Herzog’s love of music and the arts was reflected in his participation with the Gulf Coast Messiah Chorus and other choral groups.  He directed several choirs as well as the Diocesan Choir for the Diocese of Biloxi.  He served as a member or chair of several boards for community chorus groups and performing arts groups.  In 1977 he was one of three Mississippians accepted through national audition as a member of the American Choral Directors Association National Community Honor Choir.  Bishop Herzog played a key role in the formation and development of the Red River Chorale in Alexandria and served on the board of the Alexandria Museum of Art.

Bishop Herzog instituted and hosted the annual “Taste of Faith,” a benefit dinner designed to raise money for seminarian education. The bishop himself planned the menu and coordinated the preparations and cooking of the elaborate multi-course meal, with the help of the seminarians and later, deacons. This annual dinner has raised more than $150,000 for seminarian education.

He re-established the permanent diaconal program and in February 2012, he ordained the first class of 15 permanent deacons. He presided over the dedication of the Basilica of the Immaculate Conception in Natchitoches and the centennial celebration of the establishment of the diocese in 2010.  Bishop Herzog welcomed and supported the ACTS retreat program and oversaw the renovation and expansion of the Maryhill Renewal Center campus.

An active member of the United States Conference of Catholic Bishops, Bishop Herzog served as a member of various USCCB committees and as the Catholic co-chair of the Anglican-Roman Catholic Theological Consultation in the US. He also served on the USCCB Communications Committee for 10 years.   In the area of communications, Bishop Herzog made the bold decision to offer The Church Today, the monthly diocesan periodical, free to every Catholic household in the diocese.  He served as the episcopal moderator of the Diocesan Information Systems (DISC) Conference as well as the episcopal moderator of Radio Maria.

In February, 2014, Bishop Herzog suffered a stroke that affected his left side.  After several months in the hospital, the bishop underwent extensive physical and occupational therapy.  Not one to let health issues stop his ministry, Bishop Herzog worked through physical therapy and recovery. A multimillion dollar project was begun to renovate the old and outdated Maryhill Renewal Center facilities. The project was completed in 2015 and breathed new life into the retreat campus. Still struggling with health issues, Bishop Herzog submitted his resignation in 2016 and Pope Frances accepted it in February 2017.

Bishop Herzog passed from this life at CHRISTUS St. Frances Cabrini Hospital on April 12, 2019 after a brief illness and is interred at the Priests’ Cemetery at Maryhill in Pineville.