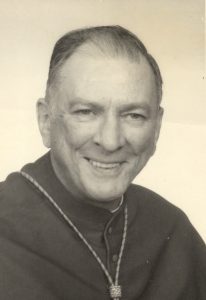 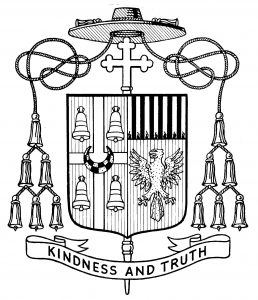 After Bishop Greco’s resignation was accepted, Pope Paul VI approved the selection of Bishop Lawrence Preston Graves, auxiliary bishop of Little Rock, Arkansas, as the seventh bishop of Alexandria. Bishop Graves, a native of Arkansas, was born in Texarkana on May 4, 1916. He was baptized in St. Edward’s parish where he completed his elementary and high school courses under the Sisters of Divine Providence. He began his seminary studies at St. John’s Seminary in Little Rock and after 2 years he was sent on to study at the North American College in Rome in 1936. When Italy entered the Second World War in 1940, Graves returned to St. John’s to complete his theological training. He was ordained a priest in June 1942. Fr. Graves was first assigned as an assistant at Immaculate Conception parish in Fort Smith but after one year, he was reassigned to teach moral theology at the diocesan seminary. In 1945, he was sent to the Catholic University of America in Washington to complete a licentiate degree in canon law. On his return to the diocese in 1947 he was named vice-chancellor of the diocese – a position he held for the next 22 years. Fr. Graves continued to teach at the seminary in Little Rock until 1961 when he was named an assistant to Bishop Fletcher and auditor of the diocese. Fr. Graves accompanied Bishop Fletcher to Rome for the Second Vatican Council and served as his translator. On April 25, 1969 Fr. Graves was ordained a bishop by Archbishop Hannan of New Orleans and assigned as auxiliary in Little Rock – making him the second native Arkansan raised to the episcopacy. He was reappointed as auxiliary by Pope Paul in 1972 when Bishop McDonald named him vicar general of the diocese and pastor of St. Joseph’s Church in Pine Bluff. On May 4, 1973 Pope Paul appointed Bishop Graves as bishop of Alexandria in Louisiana. His installation had to be postponed for 2 months due to complications from pneumonia but on September 18, 1973 Bishop Lawrence Preston Graves was duly installed in St. Francis Xavier Cathedral in Alexandria. He was 57 years old.

Bishop Graves served as bishop for 9 years before poor health forced him to retire from his office in November 1982. Bishop Graves died in Alexandria in 1994 and is buried in the priests’ cemetery at Maryhill. During his time as bishop, Bishop Graves encouraged the expansion of diocesan services with a renewed emphasis on communications. He instituted an annual Diocesan Appeal to help fund new programs while fostering continuing education for the clergy. New diocesan offices for religious education and youth ministry were added and the permanent diaconate program was begun. Bishop Graves strongly encouraged the formation of deanery pastoral councils to give his clergy a more active voice.