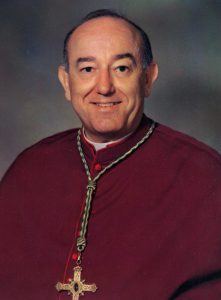 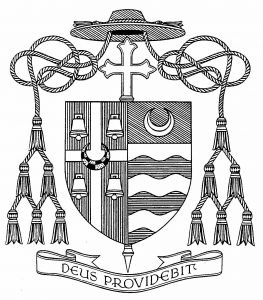 To replace Bishop Friend, Pope John Paul II selected Msgr. John Clement Favalora of New Orleans to be the ninth bishop of Alexandria. Bishop Favalora, the first Louisiana native to serve as bishop of the diocese, was born in New Orleans on December 5, 1935. He graduated from Jesuit High School in 1954 and began his studies for the priesthood at St. Joseph Seminary College outside of Covington. After completing his undergraduate work, he went on to study theology at Notre Dame Seminary in New Orleans. Transferred to the North American College in Rome, he completed his theological training at the Pontifical Gregorian University and was ordained a priest on December 20, 1961. After returning to Louisiana, Fr. Favalora completed his certification in secondary education at Xavier University. He obtained a Masters in Education degree from Tulane University. Fr. Favalora was assigned as an assistant at St. Therese of the Child Jesus Church from 1962 to 1970. In addition to his parochial duties he also served as a teacher and vice-rector of St. John Vianney Preparatory School. In 1968, he was appointed principal. In 1979, Fr. Favalora began work as the vocations director for the archdiocese. In 1981,
he was appointed rector of Notre Dame Seminary by Archbishop Hannan.