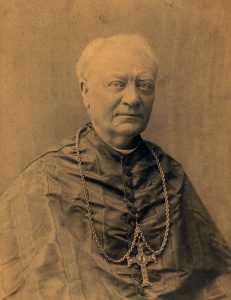 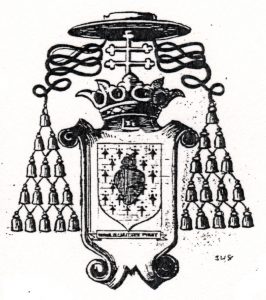 Fr. Leray was born near Rennes at Chateau-Giron, in France on April 20, 1825, one of 13 children. He studied under the Eudist fathers in Rennes and later came with their early band of missionaries to Vincennes, Indiana in 1843. Two years later he went to continue his studies at Spring Hill College in Mobile. He finished his theological preparations for the priesthood at St. Mary’s Seminary in Baltimore. He was ordained by Bishop Chanche for the Diocese of Natchez on March 19, 1852. Fr. Leray served as an assistant in Jackson before being assigned as pastor in Vicksburg. He worked tirelessly during the yellow fever epidemics and cholera outbreaks before the war and went on to serve as a Confederate chaplain during the siege of Vicksburg. After the strain of the war years he devoted himself to rebuilding his shattered congregation. Worn out by work and worry, he suffered a partial paralysis of his face that forced him to return to his native Brittany for some much needed rest. It was there that he received word of his election to the See of Natchitoches. On hearing the news of his appointment he stated: “I am a sacrificed man.” He knew all too well the work ahead. He was consecrated in the Cathedral of Rennes on April 22, 1876 by Cardinal Archbishop Broussais St. Marc.

Before returning to Louisiana, the new bishop went about Brittany to recruit new laborers for his mission diocese. He arrived and was installed in his cathedral in October of 1877 – two years after the death of Bishop Martin. Bishop Leray made few changes among the pastors of the diocese, most of whom had been tested by war and reconstruction, as they enjoyed a strong bond with their congregations. The Religious of the Sacred Heart had been forced to close their boarding school in Natchitoches in 1876 due to a lack of students and resources. In 1879, the Sisters of Mercy gave up their schools in Natchitoches and Alexandria. The bishop was left with only the schools managed by the Daughters of the Cross.

Bishop Leray was a plain-spoken and strong-willed prelate. The harsh experiences of war, famine and plague had hardened him and made him seem distant and severe at times. Practical and efficient, he was an excellent administrator. Twenty-five years of difficult ministry had prepared him for the problems he faced in north Louisiana and he could commiserate with and encourage his priests. He toured the diocese, inspecting properties and laying plans for new expansion. He established new parishes in Zwolle and Deville and ordered that all preaching and instruction be done in English instead of French.

Two years after his appointment, Bishop Leray faced an even greater challenge. On October 23, 1879, he was appointed Titular Bishop of Janopolis and Coadjutor of the Archbishop of New Orleans with the right of succession and full administrative powers. Under Archbishop Perche, the Archdiocese of New Orleans had never fully recovered from the financial difficulties of reconstruction. The situation had only grown worse with the years and Bishop Leray was assigned to clear up an almost impossible situation. In addition to his duties for the archdiocese he remained as administrator of the diocese of Natchitoches. Fr. Dicharry served as vicar general as he had under Bishop Martin. Most of the pressing chancery business of the diocese was conducted through correspondence. After the death of Archbishop Perche in 1883, Bishop Leray was installed as archbishop in New Orleans.