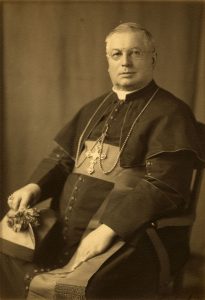 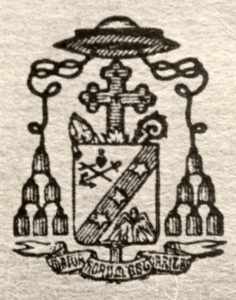 Six months after the death of Bishop Durier, Fr. Cornelius Van de Ven, the pastor of St. Joseph’s Church in Baton Rouge, received notification of his election as the fourth Bishop of Natchitoches. Bishop Van de Ven was born in Oirschot, a town in the Netherlands, on June 16, 1865. He studied at the diocesan seminary at Bois le Duc and was ordained a priest on May 31, 1890. He answered the call of Archbishop Janssens of New Orleans and volunteered for the American missions. He served as a curate in New Iberia and as pastor at Jennings, Lake Charles and Baton Rouge before his election as bishop. He was consecrated bishop at St. Louis Cathedral in New Orleans on November 30, 1904 by Archbishop Chapelle and was installed in the Natchitoches cathedral on December 21.

The new bishop was a man of impressive appearance and winning personality. An experienced pastor, he combined great gentleness with prudential judgment. He chose for his episcopal motto the verse ‘Major Horum Est Caritas’, “The greatest of these is charity”. In November 1905, the bishop appointed Fr. Antoine Piegay as vicar general and rector of the cathedral. Traveling through his vast diocese, the bishop noted the need for new parishes and missions to help offset the isolation and poverty suffered by so many families. As always, there was a shortage of priests and money but Bishop Van de Ven erected 9 new parishes and built 20 new mission chapels. With help from the Catholic Extension Society, 5 new churches were built, 6 chapels were repaired, and 5 new schools and rectories were built. The Board of Indian and Negro Missions provided funding for new churches and schools dedicated to black Catholic congregations in Marksville and Mansura.

Bishop Van de Ven recruited missionaries for his diocese from his native Holland and from Belgium as well as from France. Help came from the Holy Ghost Fathers who took charge of the new parish of St. James in Alexandria in 1911. The Sisters of Charity of the Incarnate Word came in 1910 to establish the first Catholic hospital in Shreveport, Schumpert Memorial Hospital, and St. Joseph’s Home for orphans in 1917. In 1913, the Franciscan Sisters of Calais took charge of St. Francis Sanitarium, which had been established through the generosity of Fr. L. Enaut, in Monroe in 1913. The Sisters of the Holy Family from New Orleans took charge of the new school in Marksville at Holy Ghost parish.

Under Bishop Durier, lay organizations had been established in the diocese such as the Holy Name Society and the Catholic Knights of America. Bishop Van de Ven encouraged an active participation in these and other Catholic organizations. He welcomed the Knights of Columbus and served as the state chaplain. The bishop also encouraged the active apostolate of the St. Vincent de Paul Society and the work of the Federation of Catholic Societies. The bishop played an active role as advisor to the National Council of Catholic Men and the National Council of Catholic Women and served on the executive committee of the National Catholic Welfare Conference.

On November 12, 1929, Bishop Van de Ven was recognized for his devoted service to the Church by the Holy Father, Pope Pius XI, and was named an Assistant at the Papal Throne.

In the early months of 1931, Bishop Van de Ven’s health began to fail. In April, 1932, he was confined to his bed. On May 8, 1932, the bishop died at his home in Alexandria. The Solemn Requiem Mass at the cathedral was attended by several prelates and nearly all the priests of the diocese. He had served as bishop for 28 years. A large metal cross was placed on top of the cathedral tower as a memorial in his honor.