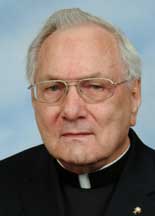 Msgr. Timmerman’s funeral will be livestreamed on the Sacred Heart Church Facebook page.

Monsignor Johannes Maria Timmermans, a priest of the Diocese of Alexandria, passed from this life at his home in Mansura, Louisiana on December 31, 2021 at the age of 97. He is survived by his nieces

Msgr. Timmermans was born on November 30, 1924 in Made, Province of North-Brabant, in the Netherlands to Johannes Timmermans and Maria Lommers.  One of six children, he spent six years at the St. Joseph Protector Seminary at St. Anthonis, Netherlands where he completed his philosophic studies during the Nazi occupation of Holland. He also studied at the Catholic University of Nijegen and completed his theological studies at the Diocesan Theologicum of Den Bosch at Haaren.  He was ordained a priest at the Cathedral Basilica of St John in Den Bosch on December 20, 1952.

After serving as a priest in the parish of Hooge Zwaluwe, Fr. Timmermans volunteered for service in the Diocese of Alexandria in Louisiana and was accepted by Bishop Greco in 1954.  He served as an assistant at St. Francis Xavier Cathedral and at St. Catherine’s Church in Shreveport.  In November, 1959 Fr. Timmermans was assigned to Sacred Heart Church in Moreauville where he served as pastor for 34 years until his retirement from active ministry in 1993.

During his tenure as pastor, Fr. Timmermans oversaw a complete renovation of the church between 1960 and 1961 as part of the centennial celebration of the parish.  He was instrumental in securing the services of the Sisters of Our Lady of Sorrows to staff the parochial school. In 1967, a new rectory was built and work on the parish cemetery, including the construction of four new mausoleums, was completed.

One of Fr. Timmermans proudest achievements during his tenure was the construction in Moreauville of St. John’s Village, a housing project for senior citizens and one of the first in the area.

For over 30 years, Msgr. Timmermans directed the Pre-Cana courses for engaged couples in the Avoyelles deanery which were attended by over 3,000 couples.  Fr. John’s distinct voice, with his native accent, was a familiar sound on the KLIL radio station during the weekly broadcast of the Saturday Vigil Mass. Msgr. Timmermans’s love of music was evident in his work with various church choirs and choral groups.  His love of his native country and culture never left him.

In addition to his parochial ministry, Msgr. Timmermans served as a member of the Presbyteral Council of the Diocese, as a member of the Diocesan Retirement Board and as Moderator of the Diocesan Council of Catholic Women.  For his service to the Church Fr. Timmermans was named a Chaplain to His Holiness by Pope Paul VI in 1974 and was recognized as Clergyman of the Year in 1992 by his brother Knights of Columbus. He celebrated his Golden Sacerdotal Jubilee in 2002.

A Christian Wake service, including the Office for the Deceased, will be held at Sacred Heart Church in Moreauville on Thursday, January 6 from 9:00 a.m. until 10:30 a.m.

A Mass of Christian Burial will be offered by Bishop Marshall with the priests of the diocese concelebrating at Sacred Heart Church in Moreauville on Thursday, January 6 at 11:00 a.m.

Internment will take place at the Sacred Heart Cemetery Mausoleum under the direction of Kramer Funeral Home of Alexandria.