Order of the Fleur de Lis 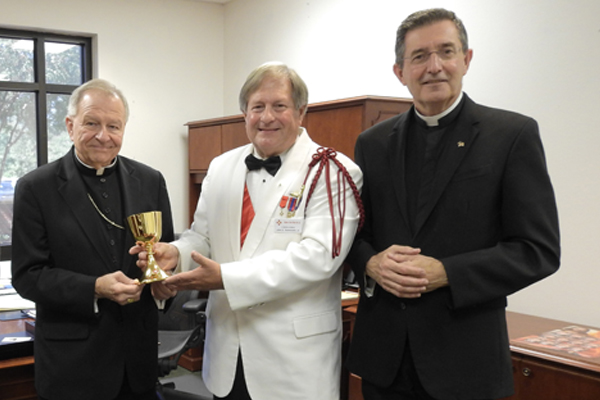 It is no coincidence that the word "grand" appears before every officer title in the Order of the Fleur de Lis. Afterall, each member of this distinguished group of Catholic men had to earn the honor of accomplishing some "grand" things in his faith life in order to be a member.

The Order of the Fleur de Lis, is a not-for-profit Catholic service organization, incorporated under the laws of Louisiana, to promote patriotism, love of country and good citizenship; to encourage public morality; to advance the concept of unselfish service to God and country; and to support and defend the Holy Catholic Church and its teachings.

"In order to be a member of the Fleur de Lis, you must be a Catholic male who has contributed significantly to the Catholic faith through his actions or accomplishments," said Grand Chancellor Walter J. Laborde, from Cottonport. "No more than four new members are presently accepted every other year."

2009 is the year that membership will be open to accept no more than four men.

Currently, membership is limited to only 30 laymen from a five-state area -- Louisiana, Arkansas, Mississippi, Tennessee, and Alabama. All bishops, in those states, who request membership are automatically accepted. Membership is open to all laymen, priests, and deacons, but they must be nominated by a current member, and go through the selection process by a membership committee and then approved by the Board of Governors.

"In some years, we can only accept one person," said Laborde. "We want to keep the numbers small so that it maintains an honorary level of membership, but also because we feel a smaller group facilitates better communication and we can accomplish more."

According to Walter Laborde, the organization was founded in 1966 by a group of 4th Degree Knights who wanted a higher level of honor and challenge for those working to promote the faith through service, public morality, patriotism, and other areas. The group wanted to assist and publicize the efforts and activities of other organizations with like objectives; to memorialize Catholic leaders and their contributions to the Holy Faith; and to cite and commend individuals and organization for outstanding public service.

In 2006, the Order recognized and honored the president of Xavier University for his recovery efforts in New Orleans after Hurricane Katrina. The organization also contributed monetarily to dioceses affected by the recent hurricanes.

The 2008 Service Award went to the Manresa House of Retreats, located in Convent, La. and run by the Jesuits. It conducts weekly retreats year-round for more than 6,000 men from across the U.S.