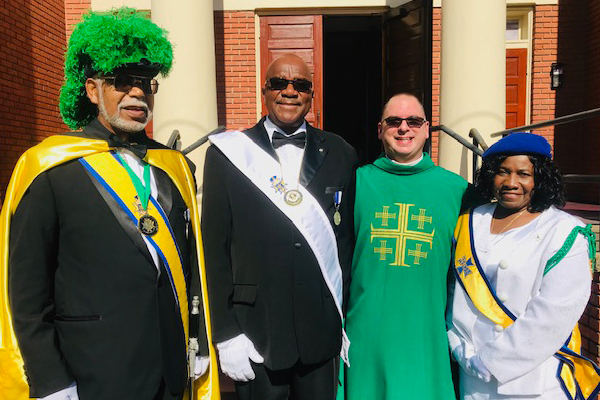 The Knights of Peter Claver was founded in 1909 and is the largest historically African-American Catholic lay organization in the United States.

It was incorporated in 1911 at Mobile, Alabama and is presently headquartered in New Orleans, La.

The Church has given the Order such strong support through the years that it now boasts nearly 1,000 subordinate units of Catholic family members throughout the United States.

The organization consists of six Divisions: Knights of Peter Claver, Knights of Peter Claver Ladies Auxiliary, Junior Knights, Junior Daughters, 4th Degree Knights and Ladies of Grace. The Order is governed by a Board of Directors and is under the leadership of the Supreme Knight and Supreme Lady, KPCLA. The Order is operated under the direction of the Executive Director and his staff.

There are six Districts and States across the country. Each district or state is represented by a Deputy and other conference officers. Districts, States, and other Divisions are represented on the Board of Directors.

The Junior Division welcomes Catholic youth between the ages of 7-18. They are organized using the same structure of the Senior Division. There is a Junior Supreme Knight, Junior Supreme Lady, along with Junior District or State Presidents and Officers. Interested youth must have made their First Holy Communion.

Our purpose is to render service to God and His Holy Church, render aid and assistance to the sick and disabled, and promote social and intellectual association among our members.

The goals and objectives of the Councils and Courts are

• to be a supporter to the local parishes and to the bishop of the diocese.

• to participate collectively in various parish and community activities.

• to make contributions to worthwhile causes.

• to award scholarships and support education.

• to develop our youth in a positive, nuturing environment

• to provide social and intellectual fellowship for its members.

The organization is named after St. Peter Claver, a Spanish Jesuit priest and friend of the poor, who was born in 1581 in Verdu, Spain of noble and well-to-do parents. After becoming a Jesuit priest, he was assigned to Cartegena, Colombia, South America, a port that was part of the “Middle Passage,” where approximately 1,000 slaves landed every month. By the “Apostolate of Presence,” Father Claver proved himself a friend and advocate to the African slaves.

Braving social ostracism, he administered to the ill, cleaning their wounds and feeding them. After 40 years of serving Christ and the poor, over 300,000 had embraced the Faith, responding to his language of love. From these, Father Claver formed an elite group to assist in the services to others. It is believed that these were the first real Knights and Ladies of St. Peter Claver. Peter Claver completed his stay on earth September 8, 1654. Pope Leo XIII declared him a saint January 15, 1888.

Our Lady of Sorrows Council #202
Bunkie