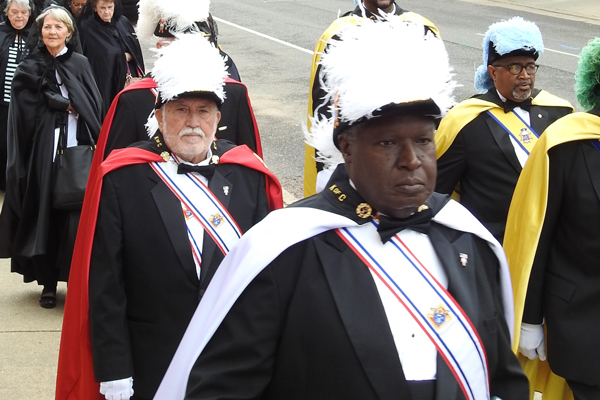 Diocese of Alexandria > Our Faith > Lay Organizations > Knights of Columbus

The Knights of Columbus is the world’s largest Catholic fraternal service organization.

In the Diocese of Alexandria, there are currently five General Assemblies made up of 23 active Councils.  While membership is limited to practicing Catholic men ages 18 or older, there are also College Councils for men ages 18-24, and Columbian Squires, for young boys ages 10-17.

In 2005, the Order gave $136 million directly to charity and performed more than 63.2 million man hours of voluntary service. Because the organization supports the Church and its local community, the Order is often referred to as the “strong right arm of the Church.”

Throughout the diocese, the Knights have numerous projects that they work on for both the Church and the community.

In Alexandria, where Donald Collins is the Grand knight, Council 91/Court 91 sponsors a Mardi Gras Ball, a camp for children, and makes baskets for needy families at Christmas each year.  During Lent, they sponsor a Fish Fry on Good Friday. For the community they help out in other ministries including scholarships to seniors, food for senior program, and assistance for children of incarcerated family members.

The list of good deeds goes on and on, but Knights of Columbus is not all about work and no play. Councils always incorporate food and fun into their activities.

In Kolin, where Kenneth Antee is the Grand Knight, Council #13296 supports the community with a gumbo cook-off, a horseshoe contest, freethrow contest, in addition to the Christian Youth Leadership Scholarship program.

The Knights of Columbus was founded by a Catholic priest, Father Michael J. McGivney in New Haven, CT on March 29, 1882.

The primary motivation for the Order was to be a mutual benefit society. As a parish priest in an immigrant community, McGivney saw what could happen to a family when the breadwinner died and wanted to provide insurance to care for the widows and orphans left behind. He himself had to temporarily leave his seminary studies to care for his family when his father died.

In the late 19th century, Catholics were regularly excluded from labor unions and other organizations that provided social services.  In addition, Catholics were either barred from many of the popular fraternal organizations, or, as in the case of Freemasonry, forbidden from joining by the Catholic Church itself. McGivney wished to provide them an alternative. He also believed that Catholicism and fraternalism were not incompatible and wished to found a society that would encourage men to be proud of their American-Catholic heritage.

McGivney had originally conceived of the name “Sons of Columbus” but James T. Mullen, who would become the first Supreme Knight, successfully suggested that “Knights of Columbus” would better capture the ritualistic nature of the new organization.  The Order was founded 10 years before the 400th anniversary of Columbus’ arrival in the New World and in a time of renewed interest in him. Columbus was a hero to many American Catholics, and the naming him as patron was partly an attempt to bridge the division between the Irish-Catholic founders of the Order and Catholic immigrants of other nationalities living in Connecticut.

Today there are more than 14,000 councils around the world and the Knights of Columbus is a multi-billion dollar non-profit charitable organization. Knights may be seen distributing Tootsie Rolls to raise funds to fight developmental disabilities, volunteering for the Special Olympics, erecting pro-life billboards and “Keep Christ in Christmas” signs, conducting blood drives and raising funds for disaster victims, or parading at patriotic events with their bright capes, feathered chapeaux, and ceremonial swords.