Catholic Daughters of the Americas 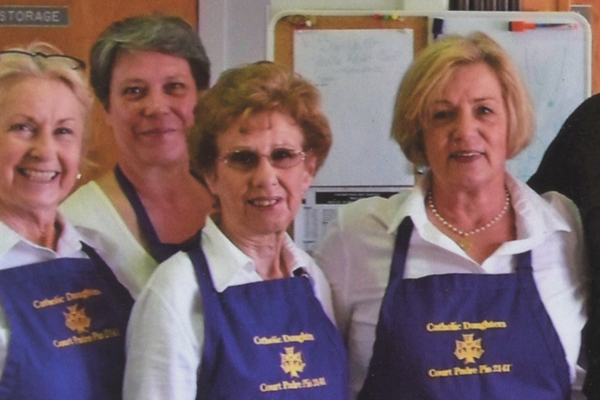 STATE APPOINTED FOR THE DIOCESE OF ALEXANDRIA

LOCAL COURTS OF THE DIOCESE OF ALEXANDRIA

Although commonly viewed as an organization of “retired women” who serve cookies and tea, the Catholic Daughters of the Americas are actively involved in a number of charitable projects.  The only requirement is to be Catholic and 18 years old.

“We’re not fortunate enough to have many young people,” said Gloria Baker, district deputy and regent of Court Bishop Desmond #1459, “It’s hard to get them to join because they are so busy with young families.”

This lack of younger membership is also due, in large part, to the growing popularity of programs for young adults.

“The CDA was founded in 1903, as an auxiliary of the Knights of Columbus, when there weren’t any organizations for Catholic women,” said Linda Gauthier, district deputy and CDA Kids Chairman. “But with the increase of young adult programs, the CDA is geared more to women 40 and older.”

It’s true that the CDA has migrated from the minimum age requirement, but they still want everyone involved.  Those members whose work, or other obligations prevent them from being present at all activities, are often vital to telephone and prayer campaigns.

Just because the CDA is generally composed of mature women doesn’t mean their activities are meager.   Nationally, the CDA works under a program called the Circle of Love.

“The program encourages us to work through love to enhance its seven points of life, youth, legislation, education, spirituality, leadership and projects,” said Baker.

Locally, the Catholic Daughters work tirelessly to reach these goals.  The courts help the diocese by supporting the Hope House, Shepard Center and the Manna House.  They also raise funds for priest retirement, the seminary fund, and two yearly scholarships.

Another project, CDA Kids, was initially started by the state court in Baton Rouge and has now become a national project.  This project enables each diocese to chose one child, 12 years or younger, who has a life-threatening illness or is underprivileged.

“We accept applications in November and then remember the child throughout the year,” said Gauthier.

The chairperson and court members send gifts on holidays and birthdays as well as keeping in touch and providing support through prayers.

“The program is very rewarding and very well received, it now lends helping hands to children across the country,” said Gauthier.

In addition to these local causes, each court contributes to the National Court’s eight charitable projects which include Apostleship of the Sea, Covenant House, Catholic Relief Services, Disaster Fund, Holy Cross Ministries, Mother Teresa, Scholarships for Teachers of Exceptional Children and Support Our Aging Religious.

“We work for God through the church,” said Baker, “We get spiritual gratification for the good deeds done through the Catholic Daughters, even on the national level.  The work we do enhances not only the community, but our spirituality.”

The Catholic Daughters of the Americas was founded in Utica, NY in 1903 by John E. Carberry and several other Knights of Columbus.  Founded to be a charitable and patriotic sorority for Catholic women, it was originally called the “National Order of Daughters of Isabella.”

The Knights established the Daughters’ motto of “Unity and Charity” and their widely recognizable emblem, the cross and crown, which symbolizes the reward promised to the faithful.  Under the patronage of the Blessed Mother, the Catholic Daughters of the Americas has become the largest organization of Catholic women in America.

During WWI, the Daughters became involved in the war effort.  They were nurses, did clerical work, staged parties to entertain servicemen and, together with the Knights of Columbus, raised $3 million for recreational activities for soldiers.  Also during this time, a youth society called “War Service Plan for Girls” was formed that eventually evolved into the Junior Catholic Daughters of the Americas.

In 1921, the name was changed to the Catholic Daughters of America.  During this time the CDA became an independent organization as the Knights of Columbus broke its ties with the organization.  By 1928, membership swelled to 170,000 members in courts across 45 states and in four countries.

During WWII, the CDA purchased millions of dollars of war bonds, contributed $100,000 to the USO, and were still involved in other issues.  They supported democracy, peace, labor and the war, women in industry and the Equal Rights Amendment while continually contributing to the war.

Bishop Fulton J. Sheen addressed the CDA in 1952 and urged the membership to extend their charity to the needs of the poor and to all corners of the earth.  In 1954, the order changed its name to the Catholic Daughters of the Americas.  Then, in 1972, Mother Teresa asked the CDA to continue to contribute to the needy across the globe.  The CDA heeds this advice as they become the “Catholic Daughters of the World.”

The Catholic Daughters donate generously to charitable causes, provide scholarships, supported aged and infirmed retired clergy and donate to seminary programs.  Also, the CDA is involved with Habitat for Humanity and was the first women’s organization to complete a house in Habitat for Humanity’s seven day “Blitz Build.”  Their national program Support Our Aging Religious! (SOAR!) provides money to religious communities with needs such as transportation or building repairs which aid elderly patients.

The CDA is comprised of a system of courts in which local courts work in conjunction with church parishes and follow mandates handed down from National and State courts.  Local courts are comprised of a regent, who is the head of the court, a vice-regent, a chaplain, who is the group’s spiritual director, a recording secretary, a financial secretary, a treasurer and the general membership.

The Catholic Daughters of the Americas currently has over 95,000 members in 1,400 courts in the United States, Puerto Rico, Mexico, the Dominican Republic, Guam, Spain, and the Virgin Islands.