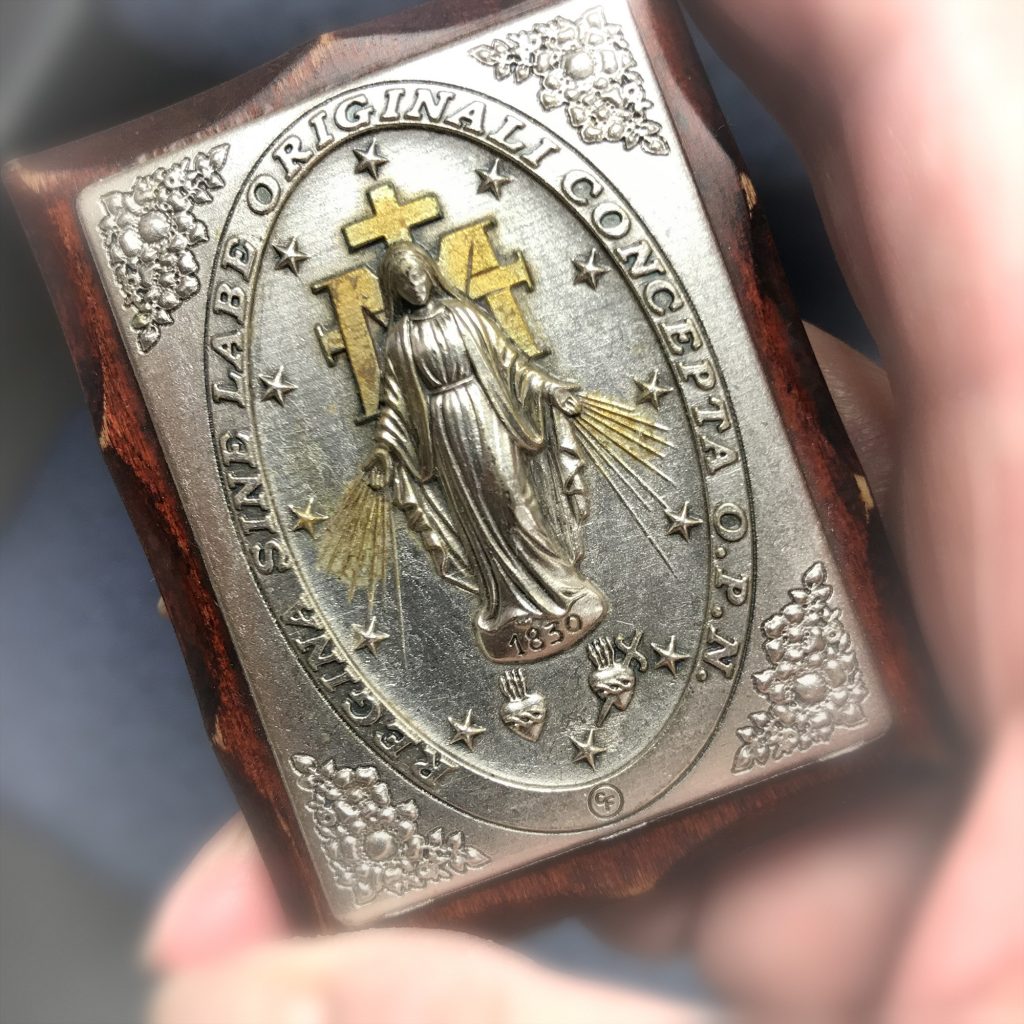 Catherine Laboure was a young a novice in the order of the Daughters of Charity of St. Vincent de Paul, the Rue de Bac, Paris. In 1830, at 11:30 p.m. on the eve of the Feast of St. Vincent de Paul, she was awakened by her Guardian Angel who appeared as a “shining child” and invited her to follow him to the chapel of their convent, where the Blessed Mother Mary appeared and visited with her for about two hours, speaking to Catherine about a difficult task that she wished to be performed.

Four months after this, Catherine received a second vision of Mary standing on a white globe with shining rays of light streaming from her outstretched fingers. Catherine heard Mary’s voice say, “These are the symbols of grace I shed upon those who ask for them.” Mary’s foot was on the head of a serpent. Catherine then saw an oval frame form around Mary and in it, written in gold letters, was the prayer, “O Mary, conceived without sin, pray for us who have recourse to thee.”

And then the image turned, and on the other side was a large M with a cross above it and a bar through it. Underneath the M were the two Hearts of Jesus and Mary, His crowned with thorns and hers pierced by a sword. Flames of Love issued from both hearts and twelve stars encircled the entire image.

Catherine heard Mary’s voice say “Have a medal struck after this model. All who wear it will receive great graces. They should wear it around the neck. Graces will abound for persons who wear it with confidence.”

Catherine saw this image six times over the next year. She refrained form sharing what she had seen with anyone except her confessor, desiring to remain anonymous. Her confessor, Msgr. Aladel, received permission from the Archbishop of Paris to have the medal produced. Fifteen hundred medals were given out June, 1832, and healings, miraculous events, and conversions were the immediate result. By 1836, millions of the medals were in circulation. The medal was originally called the Medal of the Immaculate Conception, but came to be called the Miraculous Medal due to the multitude of miracles occurring. Though Catherine would not attend any of the hearings, the medal was approved and its use blessed by the Church because of the numerous miracles received by wearers of the medal.

St. Catherine died on December 31, 1876. Fifty-seven years later her body was exhumed in connection with her beatification, and it was found to be incorrupt, soft and supple as at her burial. Catherine Laboure, was canonized on July 27, 1947, by Ven. Pope Pius XII, Some of the amazing and beautiful miracles attributed to grace from the Miraculous Medal can be found on the internet, for example, www.tinyurl.com/7amazingmiracles

Emily Ann and her husband, a former Protestant minister, became Catholic in 1998. She has worked in Religious Education ever since, and at present teaches Religion to third graders at St. Frances Cabrini School, Alexandria.