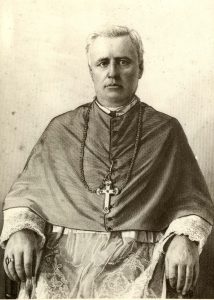 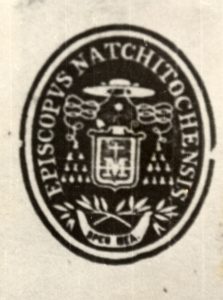 In January 1885, word arrived from Rome of the election of Fr. Antoine Durier as the third Bishop of Natchitoches. Born in St. Bonnet des Quarts, a little village near Lyons, in 1833, Antoine Durier had volunteered for service in the New Orleans archdiocese under Archbishop Blanc while still a seminarian at St. Ireneaus in Lyons. Ordained a priest in Cincinnati in 1856, Fr. Durier studied English in Chillicothe, Ohio before reporting as curate at the cathedral in New Orleans in 1857. In 1859, he was assigned as pastor of the Church of the Annunciation in New Orleans where he served for 28 years. He was consecrated bishop in St. Louis Cathedral on March 19, 1885. In an unusual preconsecration pastoral letter to the clergy and laity of his new diocese, the bishop-elect asked that no large celebrations be planned but instead he asked the faithful to offer Holy Communion for him and for pastors to encourage those who had not made their Easter duties to do so and that those who had not made their first communion to do so now at the request of their new bishop – thus “manifesting the childlike simplicity that characterized him and that always remained with him during the 19 years of his episcopacy.”

After his installation in Natchitoches, Bishop Durier reappointed Fr. Dicharry as vicar general and began a tour of inspection throughout north Louisiana. Fr. Dicharry served until his death at the age of 60 in 1887. Fr. Andrew Andries was appointed as vicar general and rector of the cathedral. In 1886 Bishop Durier issued strict instructions that every parish should establish a parochial school in accordance with the statues passed by the Third Plenary Council of Baltimore. In this, Bishop Durier was acting on the counsel of Pope Leo XIII who had urged him during the prelate’s first visit to Rome: “My son, neglect nothing towards providing Christian schools for my children of upper Louisiana.” This call became the foundation and the heart of Bishop Durier’s ministry. In 1889, he organized the first Catholic School Board consisting of Fr. Andrew Andries, Fr. J. Aubree, Fr. Leonard Menard and Fr. Celestine Mahe. This group of devoted and experienced priests was ordered to promote the establishment of new schools and to assist in the implementation of a standard and universal curriculum for the diocese.

In 1887, Bishop Durier invited the Sisters of Divine Providence from San Antonio, Texas to establish a school in Alexandria. In 1889, the sisters began St. Mary’s School in Natchitoches. In 1893, the Brothers of the Sacred Heart established a boys’ college in Alexandria. In 1904, the Marist Fathers came and took charge of the parish at Cottonport which had been established in 1889. In 1890, a group of Carmelite friars founded a monastery and school at Carmel, near Mansfield. In 1902, the Jesuit Fathers established St. John Berchmans’ College in Shreveport. With help from the Catholic Commission for Negroes, the bishop was able to open 6 new schools for black children with a total enrollment of 301 pupils in 1894.

During his 19 years in Natchitoches, Bishop Durier established 7 new parishes and completed work on the cathedral church. Bishop Martin’s original plans were cut down. Using his own savings and monies gained from the sale of the former Sacred Heart Convent and its lands and by means of a form of conscription, Bishop Durier was able to finish the construction and decoration of his cathedral. When his own funds ran out, Bishop Durier solicited funds and sacred items from his priests and former parishioners. In personal letters he stated quite bluntly what he wanted each recipient to donate and what it would cost. To save money on the interior decorations, Bishop Durier directed two Carmelite friars from the monastery in DeSoto Parish to do all the painted stencil and design work. The cathedral was solemnly consecrated on September 4, 1892.

It was during Bishop Durier’s tenure that solid brick and stone churches began to replace the white wooden chapels of Bishop Martin’s day. Large new churches were built at St. Francis Xavier in Alexandria, St. Matthew’s in Monroe and Holy Trinity in Shreveport. Parish populations grew as the region slowly recovered from the effects of the war and reconstruction. The coming of the railroads and the rise of the timber industry brought a surge in wealth and population to north Louisiana. New waves of immigration brought Italian, Lebanese, Syrian, Belgian and Czech families to the area.

In the spring of 1903, Bishop Durier suffered a stroke that paralyzed one side of his body. Gradually his condition grew worse and he died in Natchitoches on February 28, 1904. After the Solemn Requiem Mass, his body was brought to Shreveport for burial in the cemetery of the Daughters of the Cross.

Bishop Durier was a man of great strength and personality. Well read and with a ready wit, he was a gifted orator and administrator who worked tirelessly for the advancement of Catholic education in his diocese. He had a great esteem and veneration for the vowed religious at work in his diocese. With his priests he could be a stern disciplinarian who brooked no contradiction. He believed strongly in the episcopal authority and sometimes dealt harshly with any appearance of disobedience on the part of his priests. His 19 years as bishop helped to lay a solid foundation for the years ahead.